500 new homes on the site of the former Manchester Racecourse

Work will start early next year and is expected to create 900 construction jobs over five years.

The £100m development will also include a new primary school and supermarket.

The entrepreneur began his career in betting on the course and later opened his first shop 200 yards away on Cromwell Road.

He hopes to remember the site’s history by naming the streets after jockeys and horses and will soon submit 16 suggestions for streetQ names to the council for consideration.

The Castle Irwell site in Salford closed as a racecourse in 1963 and in 1973 the University of Salford built student accommodation blocks there – which were occupied until 2015.

Since then the 36-acre site has stood empty and become overgrown. Three years ago a racecourse stand was damaged by fire and later demolished.

Fred Done, owner and co-founder of Salboy said: “All the planning permission was in place before I bought it. There was competition from major builders. It went out to tender and we paid the top market price for it.

“I didn’t want to rush it. We have spoken to designers in America, Holland, and Britain. There will be a supermarket and a primary school.

“Developing this site means a lot to me. My first shop was 200 yards from the site. As a 20-year-old I worked the racecourse. The site still has a lot of attachment for me.

“The racecourse turnstile buildings are still there and are listed. We will look after them and I am asking for ideas from the public as to what they should be used for.

“We expect to be on-site next April and it will be a four-year project. We still have to finalise the detailed planning but  our plan is for the two, three and up to four-bedroom homes.”

A park in the centre of the estate will have a plaque commemorating the site’s racing heritage.

The site is close to the River Irwell, where a £12m Flood Basin and Wetlands project was recently completed.

As well as protecting thousands of homes it has created a haven for wildlife and an inner-city country park with walkways.

Planning chiefs granted planning permission in October 2018 for 500 homes to the then applicants, The University of Salford, despite criticising developers for not offering to build any affordable homes.

“But when an area starts to be regenerated and the cost of land goes up, there should be a way to alter regulations to reflect this, but currently there isn’t. I think it’s a ridiculous system.”

A town hall report said “the provision of affordable housing here is considered unviable” but added they would like to see a “balanced mix” of dwellings.

The iconic site was home to an estimated 40,000 students from the University for almost 50 years until it finally closed in June 2015.

The race track was sold to the university and Salford council in the 1960s and was initially playing fields.

It became student halls of residence accommodation in early 1973.

The old racecourse members stand was converted into the infamous Pavilion bar and nightclub, known as ‘The Pav’ and operated by the students’ union until it closed in 2009. 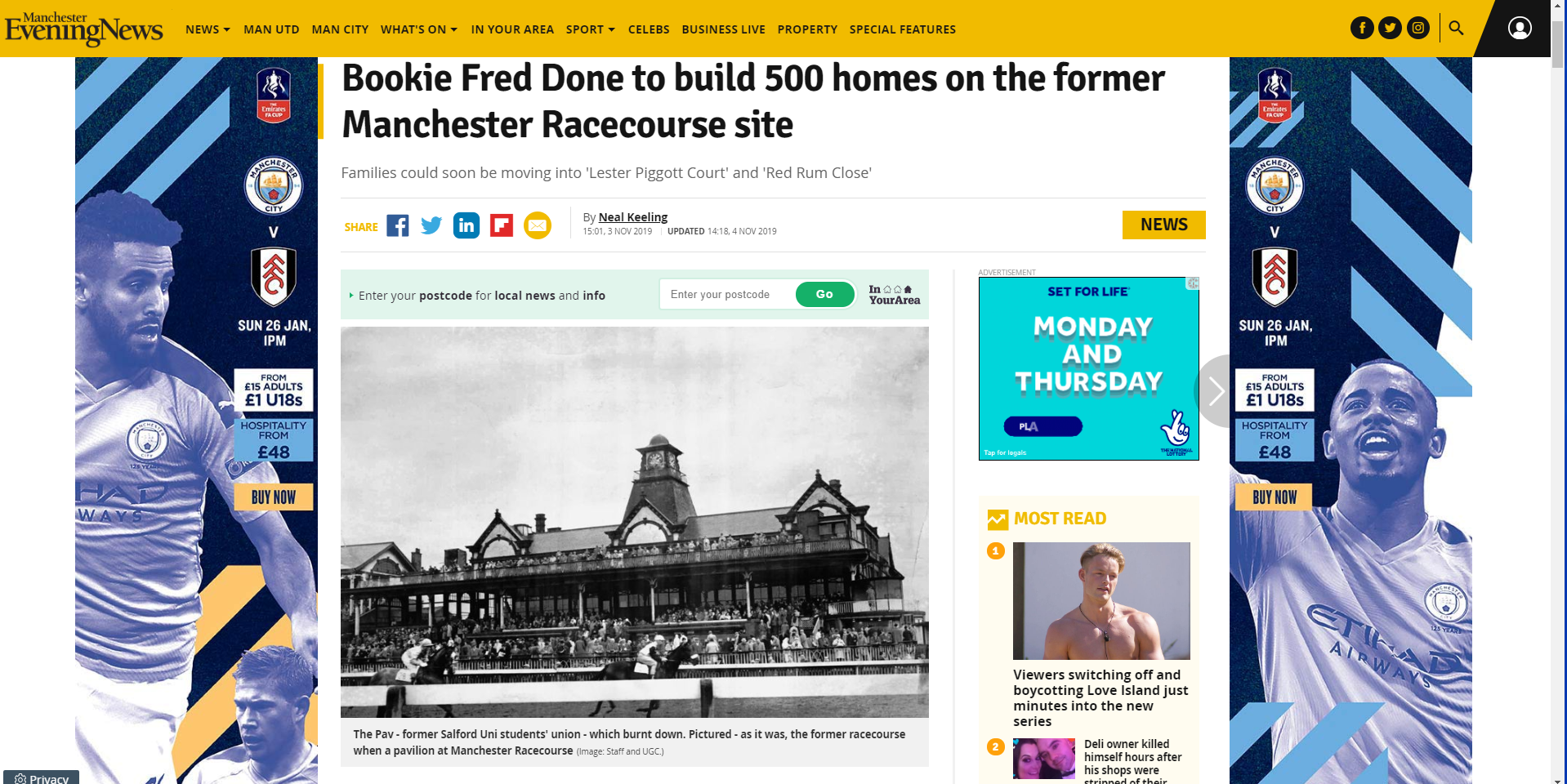 OUR ADDRESS ( BY APPOINTMENT ONLY )

DISCLAIMER: Every care is taken to ensure that all marketing materials, prices, floor plans, visuals, brochures are correct at the time of issue however these do not constitute property particulars for contractual purposes. Please be sure to check all final materials ahead of signing any purchase contract. Property prices can go down as well as up. Homes can be repossessed if you do not keep up with payments. Properties purchased off-plan or incomplete can be open to further risks and losses to buyers. We urge buyers to seek legal advice where possible and must stress that investing in property does carry risk.